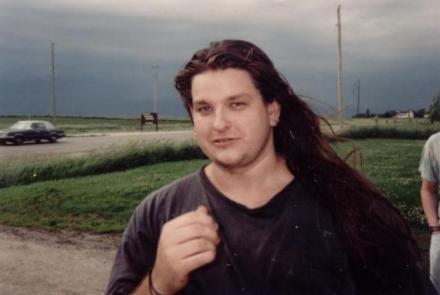 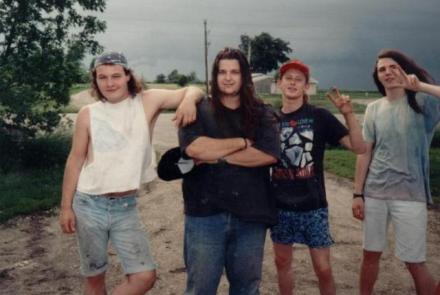 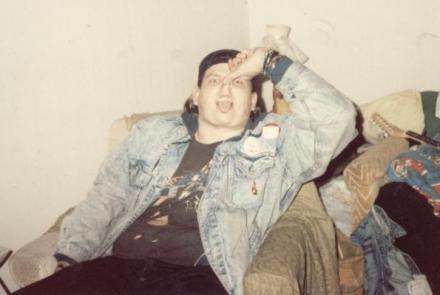 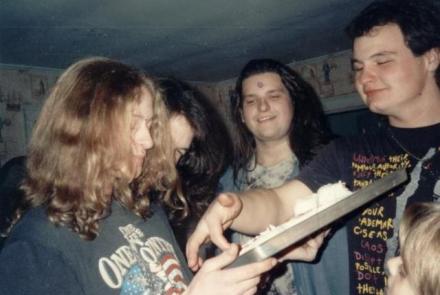 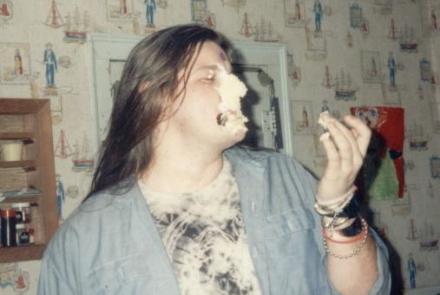 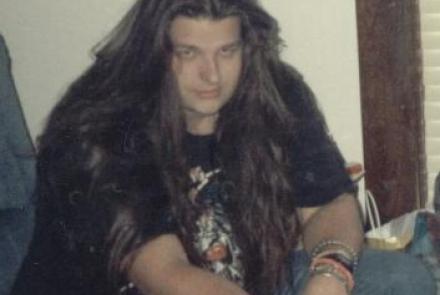 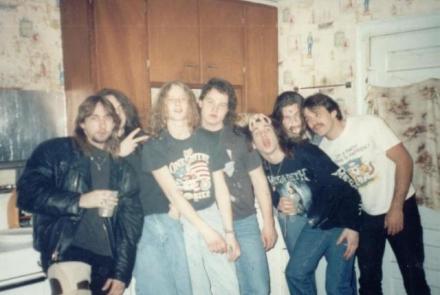 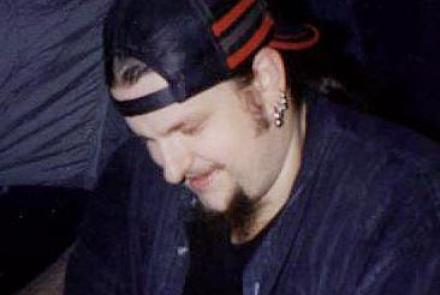 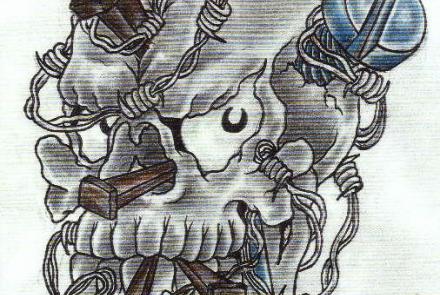 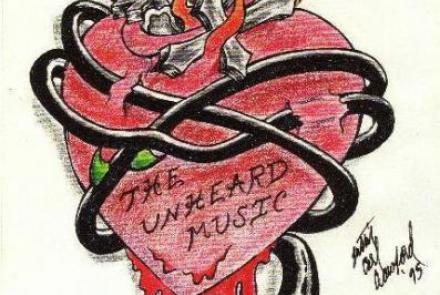 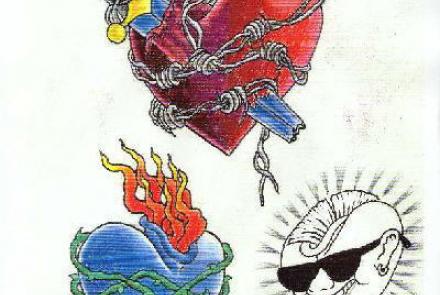 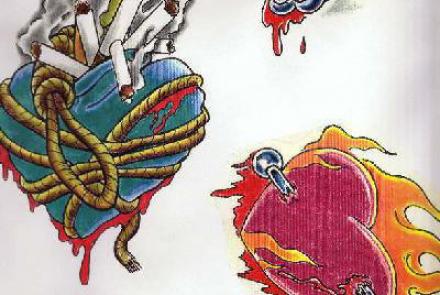 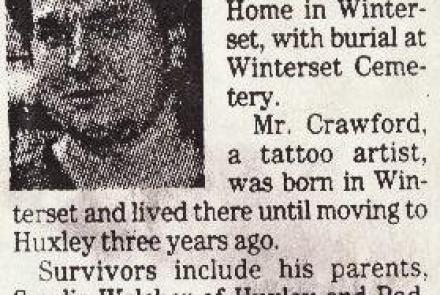 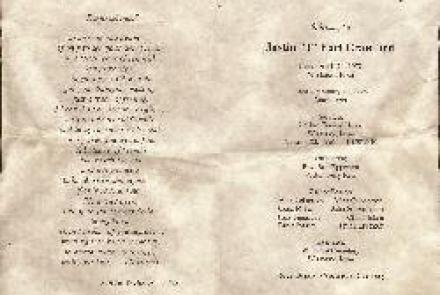 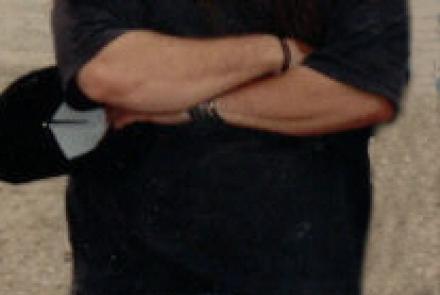 I met Birdman during the summer of 94. At the time the only other person piercing in Central Iowa was Gypsy at Last Impressions in Ames, IA. So we made the 30 minute trip to Ames to check out he's studio and talk. At the time Justin was working there and we hit it off right away. He had an interest in anything different and that was one of the things that would create the bound between us. He struck me right off the bat as the one that stood out not only in his art but his drive out of the number of tattooist working there at the time. There's those artist that you met and go yup another quick bulk maker and then there's those that you known have the drive and the abilities to stand out. Birdman without a doubt stood out as the later.

In February of 95 I left Creative Images and started the Axiom. I had a tattooist named Kasper at first that ended up leaving within 2 months of opening. One day in I believe May Jay stopped by and asked for a job. He showed me his portfolio and drawings and I was impressed but do to lack of space at the time, I just took he's number. When Kasper didn't work out I called him and he started at the studio on June 1st, 1995.

At the time I was working a part time job and after helping him settle in and going over the basics, I headed to my second job. Jay who grown up in Winterset(Famous for the Bridges of Madison County) had really not experienced Gay culture. The old Studio was in the heart of the Gay area of Des Moines, so it was a bit of a culture shock to see the side walk out in front of the studio begin to fill with drag queens. I guess there was a drag show that night at the bar next door, The Blazing Saddle. When I phoned him later that night, he expressed not only his surprise but profound interest. This was a reassurance that I had pick the right tattooist and would set a preference to us working together. I think it was at that point that I really began to understand how interested he was in everything around him. Often with artist they lose the joy of detail and expression after tattooing for any length of time but this wasn't the case with Jay. Over the period of time I knew who it only grow.

Working with Jay, the day would usually begin with him showing me the drawings he had made the night before. The one thing that always struck me about him was the amount of drawing he did. Not just for tattooing but for the love of it. He's second love was without a doubt photography. He took a large number of photos of the older building around the Studio like the Teach out Building. it was like he wanted to record all the images around him. not only as a record but as a vision of how he saw it.

He had this was of being in touch with the world and those around him that was uncanny. He quickly became less of an employee and more of a friend because he had this ability to know something was wrong no matter how much you tried to hide it. There was many a night that we would sit and talk about the personal trouble and life's struggles and as a person that tends to hide this side of myself it was surprising that he could get me to open up. I told him some of the most painful feelings and experiences of my life that I have never told anyone else.

We both shared a great love for music and of course I gave him an education in the world of Punk Rock. He also played guitar and we had talked at one point of maybe writing some songs. Also he loved Knifes and collected them. It was funny to me that someone who I couldn't imagine causing pain to anyone would carry not only one in his pocket but often one in his boot and on his hip. He would also bring in his blow dart gun every once in a while and when it was slow, we would sit there and blow darts into a box at one end of the studio.

In the fall, I began to apprentice Dianne and the two of them built a strong bound. I think it's the only time I've ever worked with any group of people that everyone got along. I can't remember once either of them bitching about the other. It was a special time in my life and the life of the Axiom. I often look back at this time as one of the most joyous times in my life. I miss them both greatly and wish I could go back to that time.

It was on an usually warm February weekend when I left to go visit a friend in Lawrence, KS. I remember sticking around the studio later then usually that night and hanging out with Jay and his mother. Jay was finishing up a calve piece on his mother Sandy of an American Indian. We joked and talked about life and I left around 1 to head home and said my good byes and told him I'd see him on Wednesday. That would be the last time I would see him alive. He had been having some health problems but seemed better and I never gave it a second thought.

I was heading home from KC and decided to give Dianne a call and make sure everything was OK. She answered and was crying. It took a few minutes to get out of her what was wrong and then it the two + hour drive back to sink in what had happened. I mean I was 26 at the time and death then and now just seems so far away. Jay was only 23 and it just seems impossible that he would be gone. I remember driving home and thinking of all the people I knew that had left a much smaller impression on my life then he had. The death of someone you care for is hard to take but the death of someone you care for who is so young is impossible to take. It was simply hard to understand. There was no period of coming to the realization that the person's time was too short. This was a healthy person, and this wasn't a car wreck or a violent end. This was something that could be considered natural causes.

He died of an embolism, a blood clot that had traveled into his lungs. The day before his death, he had gone to the hospital complaining of shortness of breath. Due to his heaviness, the doctor assumed it was heart problems. So instead of running a blood gas test, They gave him an EEG. Of course there was nothing wrong with his heart. Maybe if he would have told them about the bruise on his leg for a fall he had taken the doctor would have put two and two together but would you think that a bruise had anything to do with breathing problems. This hit Dianne hardest because she is a RN and felt that she should have known but in hind sight none of us could have saved him.

Justin was born April 19, 1972 and left us all on February 20, 1996. We put him to rest on February 23rd but he lives on not only the memory of all those he touched but in his art that we will proudly carry to our own graves. We all headed up there to pay our respects. Dianne, Paul, Lanny and myself. Each year where ever Lanny, Paul and myself are on the 20th of February we do a shot of Wild Turkey (Jay's Favorite) and I think of all the things that have happen since then and not been able to share. Jay I miss you but I'll never be able to forget you.

Click here for gallery of Photos of Jay and his Artwork

Below are some of the comments left by Jay's friends in the past. If you would like to leave one too as a tribute please do so.

In Loving Memory of Justin "J" Crawford. I put an article and his picture in the Winterset paper in 2006, ten years after he left us to graduate to Heaven. Now it is almost 13 years.

I wrote these words to him:

It seems like yesterday ... and it seems like a lifetime ago. My son. You were the best thing that ever happened to me, and your dying was the worst. Nothing has even been the same, and never will be again.

Life is very hard. It is a continuous lesson learned, although it is surely uncertain at the time the reasons we must learn them.

I can always feel you in my heart. Your friends and family, all those whose lives you touched in any way will always be enriched just for having known you. Thoughts of you will always make us smile.

I thank God for you. And I thank you for watching over me, my guardian angel. There aren't enough words to tell you how much I love you and miss you.

A wise person once told me, "If anyone knows what it feels like to lose His only Son, it is God." I find great solace in that.

Dear Davo - Thank you so much for keeping this site for him alive and well. I always cry when I read it. But that's o.k., it's a good thing to cry sometimes, and sometimes you just can't help it. God bless you, dear friend.

I did not know Justin but I met Sandie on the internet. I can see she raised an admirable son. I wish I had known him. Aunt B

She is with her son.