Each Piercing Beaten to Death

The Ear Lobe Piercing is by far the most common piercing in the world. It is represented in just about every culture in the world. This maybe because it has a high success rate or it could be that they just hang out there and beg to be adorned with shiny jewelry. So, you might be asking yourself why when there is so many piercing to choose from I decided to write a blog about them?

Well, it’s because a great deal of activities in modern life that have common place that we were don’t consider it’s importance. To many, especially with females, it has the act of getting your ears pierced has become a rite of passage. A way to display to the world that you are no longer a child but an adult. A marker in that confusing transformation that is the teenage years. For others it’s a symbol of their rebellion or a first step of claiming their own identity. For most of us it was the first time that metal pierced our body and permanently altered our body. A start of a long road of customizing and altering our body into our own vision of ourselves. Thus making ear lobe piercings one of the most important piercings of our lives.

Ear Lobe piercing seems to have been around as long as civilization. The Ötzi the Iceman's mummy has been dated back as 2,000 B.C not only had a number of tattoos but he’s earlobes were pierced with 2g to 000g jewelry. There’s is also evidences that both Persian and Egyptians pierced their lobes. In fact, one of the many treasures found in Tutankhamen’s tomb included earrings. The trend would continue during the Rome Empire into the modern age.

During the first part 20th century in America, the trend of wearing jewelry on ears became popular. However, good girls wore clip-on jewelry instead of piercing their ears. In fact, there was a great deal of prejudice against those with pierced ears. It was thought that only those of lower morals and classes pierced their ears. The idea was that it was barbaric and not civilized.  How much of this was due to there not being an easy or commercially available method, is unknown.

That began to change during the mid-1950s and 1960s as it became more acceptable for women to have pierced ears. Often done in a doctor's office but many department stores and beauty salons began to hire registered nurses to come in a few times a month and pierce ears. This was done with a device that was a clamp with a cone-shaped punch or with a needle. Since there was limited access to medical professional the tradition of “Piercing Parties” began in the 1950s and 1960s. Often involving a sewing needle, thread, piece of ice or a potato and some rubbing alcohol. Of course, this wasn’t the cleanest or safest method but the most common.

Modern Ear Piercing Devices or as they are often called, Ear Piercing Guns, began to be introduced into the retail beauty market in the late 1960s. Though the urban meth that I personally have quoted over and over, stated that the device was developed first for animal tagging, the fact is that many of those devices were either based off Edward Seyfarth 1880 patent for an ear piercing device or at least in parallel. The fact is that development of the modern device may have benefited from the cattle tagging devices but not come directly from it. They are more like cousins than parent and child.

With the widespread introduction of the devices, the act of getting pierced by a medical professional or at a party by friends and relatives was replaced with a trip to the local mall. Making the act of getting your ears pierced, at least for female, less of a rebellious act and increasingly a common rite of passage for teenage girls. However, with the rise of the counterculture during the 1950s and 1960s increasingly men began to get their ear or ears pierced as a sign of their association with the counterculture to the point in the 1980s were getting the left ear was as common as women getting both ears pierced.

Why the Left Ear? For the most part, it was believed that the left represented heterosexuality and the right homosexuality. No one is sure just where this started but maybe have something to do with the Gay S&M sub-culture uses left for top and right for bottom. Whether this is the case or not, who knows. By the late 1990s and the rise of the Body Piercing industry, it became increasingly more common for men to pierce both ears. Also, the trend of stretching the piercing to large sizes also wrongly called gauges became popular.

This has been an ongoing struggle with the body piercing industry to educate the public to the dangers of ear piercing devices. Since most of the general public has been pierced with them and saw little or no problems, it’s been an uphill struggle partly because they are simply so commonplace. However, even with modern cartridge style devices, there is a number of Issues:

Piercing the Ear Lobes of Infants, Toddlers, and Small Children:

A few years back I wrote a blog on why I will not pierce children called Piercing Infants And Small Children.

If you are a parent considering having your child pierced, I strongly suggest that you read it and make an educated decision. It seems in the last couple of decades it has become increasingly popular to pierce young girls, often toddlers and even infants. This brings up a number of issues that need to be considered.

The Ear Lobe or lobulus auriculae is the loose tissue located at the bottom of the ear. There is a large blood supply in the area and it may help to regulate the blood temperature and keep the ears warm. Though there is no proof of this. It is also for many a sensitive area filled with nerve endings and an erogenous zone.

There are two general types of lobe:

Though it’s my experience that the lobe’s shape is vastly different from person to person. Often thin or thick and different shapes from the left and right ear. Other the years I have noticed that often in older people the tissue seems to separate and be less “meaty”.

When marking and placing on both ears, it can be a guessing game. This is because no one has two perfectly matched lobes. Also on a majority of people, you can not see both lobes at the same time. So, the idea is to try to adjust each piercing, so it looks like it matches in placement based on the anatomy.

It is not uncommon to have a grouping of 2 to 6 piercing in one earlobe. It all comes down to whether there is space to do the piercings. I generally try to keep the piercings at least a 1/4 of an inch apart and follow the bottom edge of the lobe to adjust the location of the piercing. That way it follows the natural shape and flow of the body. Usually, I will ask for the clients input because if they are wearing mostly stud style jewelry a straight line upward from the front might be more aesthetically pleasing.

I think it would be impossible to talk about Ear Lobe piercings without bringing up stretching the piercings. If you would like to learn more about stretching piercings, I would suggest that you read my blog on the subject, Stretching.

I’m a traditionalist when it comes to having large gauge jewelry in the belief that the thicker jewelry should be earned. Meaning that the thickness of the jewelry is increased over a period of time. For this reason, I will scalpel or use a dermal punch. Not only do I feel the procedures are often beyond the expertise of the people doing them but it’s cheating. They also both cause a great deal more trauma to the piercing area and can lead to a reduced blood flow to the area.

If you take your time, listen to your body there is no reason that you couldn’t go from 10G to 0g or larger in 20 to 24 months. It might seem like a long time but you will end up with a much healthier and strong piercing in the long run. I would suggest bringing up your plans to stretch the piercing when you choose the jewelry.

This is a widespread belief that once they are pierced and heal, they will never close. However, once the jewelry is removed the body will shrink and compress the tissue until it can reconnect the tissue. When a piercing closes, it will connect the tissue in the center of the piercing and then begin filling in the hole moving outward. So, often the piercing will appear to be open when in fact it is not.

Since most ear piercing studs are of a smaller gauge around 20g or thinner, it is easy to force the jewelry through the blockage in the center. Basically, re-piercing the piercing. That's why when you put jewelry back in a piercing after it's been empty for a while takes the pressure and hurts.

Now that said, larger gauge piercings that have been stretched may never close. The benchmark is 2g. When stretching lobes this should be considered because it will take plastic surgery to close the piercing.

The size of the jewelry should always be based on the anatomy of the client. Both the shape size and thickness of the area should be considered when choosing jewelry. Also their plans for the future.

There are issues that should be considered before choosing jewelry size and type:

I always do the piercing FreeHand. Forceps are really unneeded. Though some piercers believe that it makes lining up the piercings much easier, I have experienced that it tends to distort the area and increase the risk of the piercing not being straight through.

Though they heal rather quickly healing in two to three months, during the first couple of weeks they are prone to discoloration, redness, tenderness to the touch, bleeding, redness and swelling.

Basic aftercare will involve hot soaks or hot compresses with warm water and sea salt twice a day and cleaning the piercing in the shower twice daily. Also, you will need to take steps to reduce the likelihood of cross-contamination. For more details go to Basic Aftercare Instructions.

Somethings to consider before getting the piercing especially if you are getting both lobes done. If it is an issue you may want to consider doing one side at a time:

The piercing is not that painful. You will experience throbbing and aching for about 20 to 30 minutes after the piercing is done. Then there will be tenderness to the touch for about 2 weeks.

How to Heal Earlobe Piercings - Aftercare Instruction by a Piercer EP01 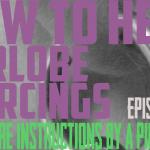 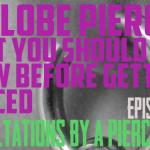 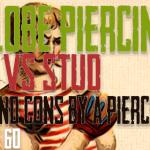 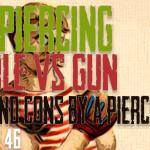 Earlobe Piercing Pros and Cons from a Piercer EP 05 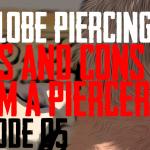